Can I be a little self indulgent here? Can I get something off my chest? I need to have a shout and scream about my Ford Focus. Won't do any good to my wallet, but it might do some good to my psyche... 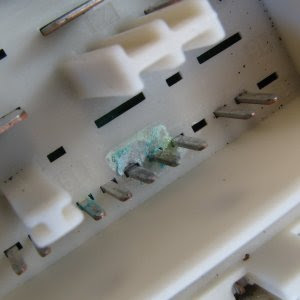 There have been a couple of posts on my blog about the long term ownership of a Vauxhall Astra and a Ford Focus, both diesels, very similar specs, used in a similar way. See here and here.

The Focus is four years younger than the Astra, and has done half the mileage. But recently it let itself down, it let me down, it let my local Ford dealer down, and it let down Ford UK.

See this picture to the left? See the small amount of corrosion on the terminals? That cost me £639. Yes. £639!

One wet morning recently (are there any other sorts of morning recently?) I set off in the Focus on the school run only to find the wipers were not working. My local Ford Dealer (understandably) took a day to track down the fault. In the passenger side foot-well, behind the glove box, resides a fusebox. It is a big lump of plastic with fuse holders and some sockets into which plugs the wiring loom. As you can see above, somehow the terminals for the wiper connection had corroded and failed. The dealer didn't give us the choice to just clean up this corrosion, but ploughed on and replaced the fuse box at a cost of £380 odd (or over 2 Xbox360's worth as I like to think of it). They found no evidence of a leak on the foot-well, so how it happened is a mystery.

I have subsequently approached Ford about the resulting alarming bill of £639, but to no avail. The car is obviously out of warranty. They are unashamed of the ridiculous cost of this lump of plastic. The dealership sticks to their idea that no repair could have been attempted. So I've got to take it on the chin. No explanation has been put forward as to how this happened, so there's no reason think it won't happen again. I doubt it, as I think the fault must have originated in the manufacturing process. I'd love to hear from anyone else who has experienced a similar problem. I keep thinking that if this fault had manifested itself on the motorway at 70mph in the fast lane on a very wet day, then I would have had a much harder time of it. At least only my wallet got hurt this time.

"Epic fail", Ford... yet another round in the fight to my reliable Astra!

I wrote this article a few years ago now, and I must say it was a cathartic exercise to try and make myself feel a little better about this, um, misfortune. However, in recent times I have been contacted by several people in exactly the same position - I was not alone!

It seems extremely probable that the fault is caused in fact by condensation produced by the car's air-con dripping from the glove box onto the unprotected fuse box. In other words a serious design fault. For this, Ford are regularly charging somewhere between £700 to £1000 to put it right - this does not seem fair, now does it?

A recent victim has decided to set up a Facebook page on this subject, you'll find it here : Facebook

Could I urge you if you are a fellow sufferer to visit the page, or to contact me here

Ford Focus owners can check on parts pricing with their local dealer, or try Partsgeek for Ford Focus replacement parts online. Whichever Focus model they own, there are always plenty of parts options online, as well as helpful instructions for replacing Ford Focus parts.

Many years have passed since I wrote this particular article, but it is distressing how many time I have been contacted by other sufferers of this problem. You will see below mentions of the Kuga also having this issue. There have been published articles about this and much discussion, but, that I know of nothing from Ford themselves.

I doubt if they will lose sleep at Ford HQ, but I would like them to know that I will NEVER buy another Ford, which is a pity because one of my favourite cars in the past was a Ford - but not a Focus! I was recently fortunate enough to have the chance to buy a new car and after my Ford experience I went for a KIA with a 7 year warranty - I never want a repeat of this sort of event ever again. And I could rant on about how poor my local Ford dealer was subsequent to this fault with another Focus issue, but I'm already on blood pressure tablets, so I'll let it lie. Ford - it's okay if you have a design flaw in your cars, nobody is perfect - but if you do - fess up - pay up - you're just losing customers if you don't.