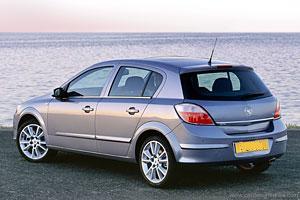 The Astra discussed here is a 1.7 CDTi. Now, I've never driven a turbo diesel before, and I was half looking forward to it, half not. I knew from diesel evangelists that it would be quick, and economical. But I also knew that it would sound like a tractor and wouldn't rev. In all respects I was proved correct, but I was surprised just how much these expectations were true.

When the turbo kicks in this thing flies. Despite having driven many sports cars, I cannot recall a car with so much poke from 40 to 70 MPH. My young son calls it 'silly speed' not being able to differentiate between speed and acceleration.

"Engage silly speed!" he shouts from the rear, and I put my foot down and you do feel that push in the back as the car pulls away.

But it does sound like a tractor at slow speeds. I had thought that maybe with all the technology that has no doubt gone into this engine, they might have been able to avoid that clatter, but no. I suppose you do get used to it, but driving slowly is not great fun for a driver who cares about these things, which I admit I do. Once you're up and running things naturally improve, but it's still a bit rough compared to a petrol.

The payoff therefore must be fuel economy? Well yes... so far the car has averaged 50 MPG. My previous car of a similar size managed 40, so it is a significant improvement, but not a massive one. Maybe I "engage silly speed" too often.

So, it accelerates well, but, and it's a big but, it's really hard to accelerate smoothly. From a standing start the turbo effect is hard to get used to. Nothing much happens, then it kicks in at a certain level of revs, you shoot forward, change gear and the whole thing slows up until that rev level is reached again. I admit I have not as yet mastered the art of keeping it 'on the plane' and achieving a lurch free journey. Drive it less aggressively and it's fine. Maybe I'm expecting too much.

The outside. Nothing to complain about there, it's a nice looking car. Somehow it looks like an Astra, but looks new too, which is good. It certainly looks better than the old Astra, and for me the new Focus manages the opposite compared with it's predecessor. The alloy wheels are a faff to clean, too many spokes.

The inside. It feels very, very solid. It's low on cup holders and places to keep "stuff", but the glove box is big and the dash quality is good. No rattles. The CD/radio is excellent, in fact this car has the loudest distortion free sound system I've ever experienced, put on "The Darkness" and go deaf.

The headlights, which on this particular car don't look-around-corners as on the adverts, don't seem that great on main beam. And they do look like a bunch of cheap plastic torches. The brakes are fantastic, disks all around with ABS, really good. Handling in normal circumstances is fine, I haven't thrashed it around a track, and it hasn't got low profile tyres, but for every day it's good.

The boot is ample, rear seat legroom is adequate. Seats are comfy, certainly a little firm at first and slightly slippery, but they have caused no problems on long journeys. Parking is easy, visibility is reasonable to the rear.

The handbook is appalling. It's so full of stuff about things you haven't got that it's of little use. Everywhere they tell you interesting features, but then you discover that you haven't got that option. As this car was already quite pricey I wonder just how much it could have cost if all the gubbins mentioned was actually installed.

Overall I like it, though I think I'd like a good big engined petrol version more, and I'd live with the inferior fuel consumption. The coupé version, when it arrives, will certainly be worth a look.