DVLA play a major role within the number plates industry and since 1989, they have raised 1.8 billion for the Treasury purely from the registration numbers they have sold via their auctions and website.

They started selling them in the 80s when they became aware that sought-after combinations were being traded for significant sums of money. To capitalise on this, the DVLA began to reserve certain registration numbers, such as those that resemble names or words, and combinations containing less characters, in order to lodge them in future auctions.

Hundreds of thousands of new combinations are released each year. The majority are put up for sale on their website, whereas the most desirable ones are also reserved for the future auctions, aiming to sell them for their true market value. 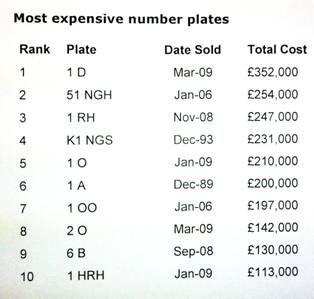 What are the available styles and where can I get them?

There are 4 different types available, and the format is based on registration numbers issued in different eras.

Dateless registration numbers consist of combinations of up to 4 numbers followed by up to 3 letters, or vice-versa. This style tends to be the most popular as they can go on any age vehicle and ultimately covers up its real age. These will only be found in the DVLA auctions and/or advertised with number plate dealers such as CARREG.com.

The rest are age related numbers, so you can distinguish when it was issued by the 'age identifier'. For the current style, the 2 digit number is the age identifier, for the prefix it is the first letter, and for the suffix it is the last letter of the combination. For example:

Current styles and Prefix styles can be found on the DVLA website, and/or with number plate dealers such as CARREG.com, but some of the more desirable ones may be in the DVLA auctions also.

Suffix styles will only be advertised with dealers like www.CARREG.co.uk and/or in the DVLA auctions.